Back when we bought our house we knew we needed a string trimmer to edge the lawn and reach tight spots a mower will miss. After some research at the time we wound up going with the Worx 20V battery powered string trimmer (Affiliate Link). We have been pretty happy with it every since. A full charge will usually take care of the front or back yard, but not both. Also, the ability to flip it around and roll it on the wheel for edging is great. On top of that, its light, though after using it for 30 minutes you might forget it. The battery has held up well and we have had zero problems with it.

You can therefore imagine our surprise when my wife was finishing up the backyard and the thing just stopped. We didn’t hear a sputter or grinding or anything, it just wouldn’t turn on when the switch was clicked anymore. I was worried we would need to replace it which wouldn’t be the end of the world. However, since I knew it was a pretty simple electrical device I was hopeful I could repair it.

My troubleshooting heuristics usually flow from easiest potential issue to check to hardest issue to check, with some variances allowed for more likely problems. Since it required no disassembly, the obvious fist step was to use a multi-meter to check the battery voltage. The battery was very conveniently labeled, so it was easy for me to find the + and – terminals. I set my multi-meter range to 200V DC and found 20 volts between + and – just as I should. This meant the battery was not the problem. 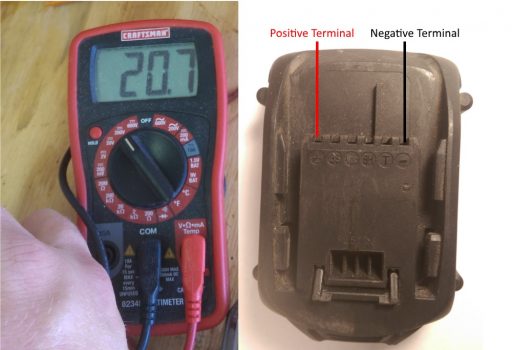 Battery operated tools run off of batteries that can supply a lot of current in a short amount of time. In electrical engineer speak we would call this property having a low internal resistance. You can also think of this as having a lot of power. For this reason, you do need to be careful when working with these sorts of batteries not to short them out. The possible issues from shorting these batteries include:

All that to say that as long as you don’t provide a short between the positive (+) and negative (-) terminals you should be fine.

Just so you don’t think I am a genius, I did also explore an issue that turned out not to be the problem. I examined the trimmer closely and noticed a substantial amount of fibers wrapped around the shaft like hair and grass. I wondered if this large amount of material could be causing the shaft to stick. Therefore, I attempted to cut and pull this material loose with some tools my wife had around for clay sculpting. While I did get some of this material free, it didn’t seem to improve anything on the trimmer, so I went back to troubleshooting. 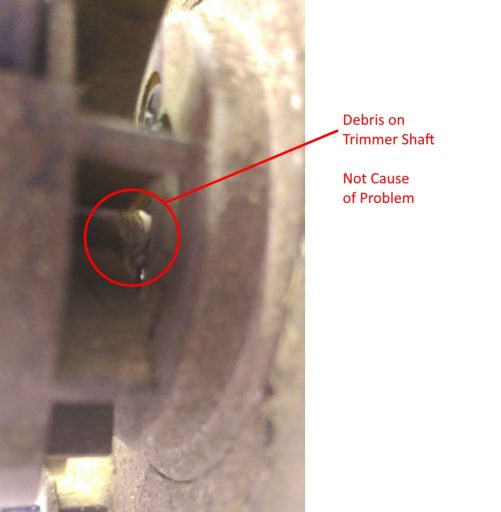 Now I had a real conundrum though, if there was an electrical problem it was probably either near the handle and switches at the top, or near the electric motor at the bottom. I chose to start at the bottom near the motor for two reasons: I listened and felt both switches and heard good clicks and contacts, also, there seemed to be fewer screws in the bottom portion.

I was in too much of a hurry to fully document the disassembly for you. I began by removing the cover with the logo on it.

Removing the Cover with Logo

I don’t have pictures of the disassembly, but I think I basically did the following:

After I got it apart I wound up with two pieces. The casing which holds the motor… 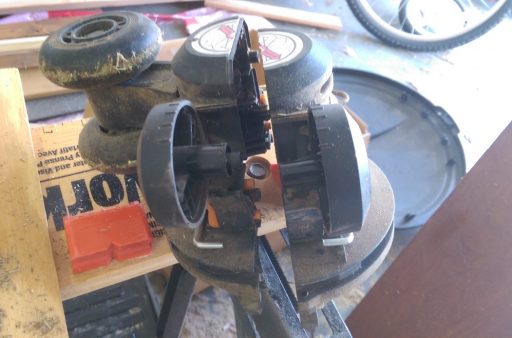 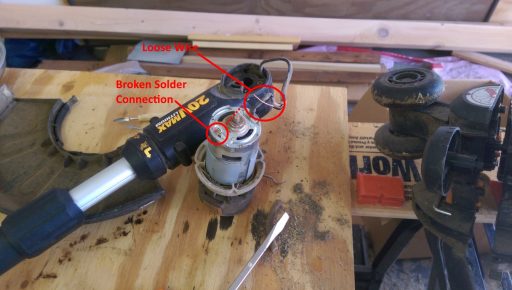 Finally, I knew what the problem was. I was very excited that this was the issue because fixing a broken solder connection is something I have done many times and already had the tools and materials for.

Luckily for this engineer, the problem turned out to be a broken connection between the motor and the wires that run up the shaft. Re-soldering a wire is definitely in my wheelhouse while small engine repair for a gas model is not.

First, I setup my soldering workstation. For work like this you can use either a small electronics soldering iron, or something with a bit more juice. In this case, since my little Radioshack iron was just taking forever to heat up, I wound up using my larger soldering iron that I normally use for stain glass. (Note that both are in need of replacement at this point though, and are pretty much good for nothing). You can either buy a nice soldering station, or a holder, or you can do what I do and use some nails in scrap wood. 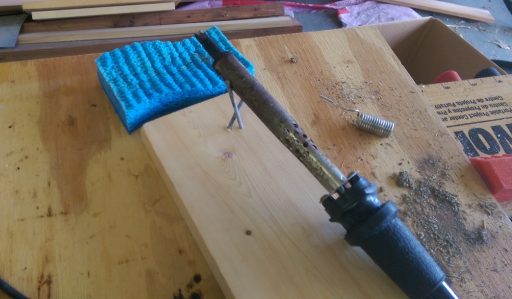 To remove the broken solder connection from the terminal on the motor, I used a desoldering pump, or “solder sucker” like this one at Amazon (Affiliate Link). If you do any amount of solder repair, you need one of these. The technique with a solder sucker is pretty obvious: push down the pump until it clicks in place, then use an iron to heat the solder to liquid, put the tip of the sucker as close as you can and hit the button to suck the solder into the pump. Then wash, rinse, repeat, until you get it clean enough to re-solder. Use a bit of flux to get the old solder to flow if needed. You can see the de-soldered motor terminal in the following photo. 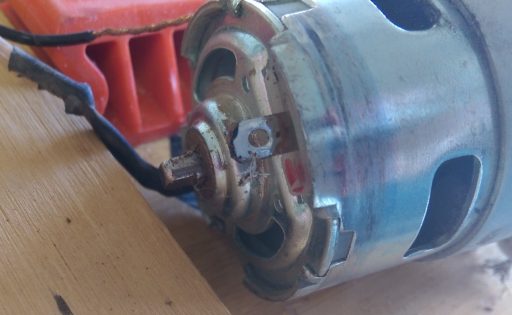 To repair the connection I decided to duplicate the original assembly technique which was to leave a long exposed piece of wire but wrap it in heat shrink tubing. The downside to this is that the tubing may wear off and cause a short, but shortening the wire down to the insulation would be risky because the wire moves in the swivel head and if it breaks again you will need some slack to re-solder it again. I cut the tubing to length and slid it on the wire, then attached the wire to the terminal and prepared it for soldering as shown following. 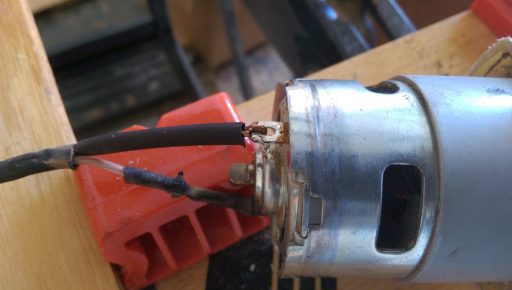 Re-soldering is as simple as heating up the terminal and the wire and applying solder until its covered. I used a solder with a flux core, but you could also use a pure metal solder and supply your own flux.

I then pushed the tubing down and used the soldering iron to shrink it around the terminal and wire. However, I was not happy with the results so I added some electrical tape to the repaired connection, as well as to the existing connection which was showing some wear. After putting the tape on it was time to put everything back together. 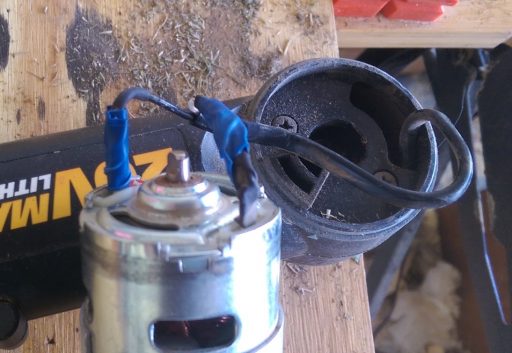 Reassembly was pretty tough on this one. Since I had pretty much just forced it apart (and not removed that metal wire guard) the thing did not want to go back together. To make matters worse, you are trying to hide a wire in a swiveling joint, which is pretty hard. In the end I did get it, but even if you do a better job of disassembly I think a second pair of hands would help alot.

These Worx trimmers run around $100 USD so I was very happy to have been able to fix it in less than an hour.

My issue turned out to be a broken solder connection. In the case of a battery powered trimmer like this, there aren’t a whole lot of ways for it to break. Off the top of my head, the other potential issues you might check for would be:

I should also give a shout out to Worx for the free trimmer spools for life deal they have with these things. I owned this one for 3 years and just learned about this now. All in all a good tool, but nothing lasts forever. 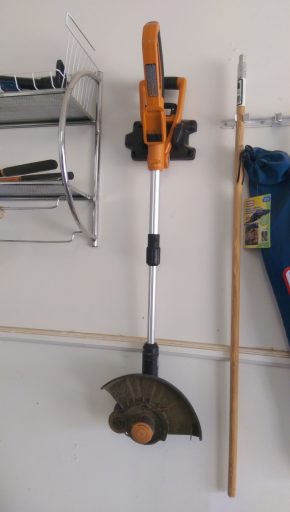 It turns out there was one more twist to this story. Shortly after this repair the trimmer failed again. I disassembled it again and found that the wire had been broken again. Further investigation revealed that the root cause of this was the motor’s shaft had rotated against and almost instantly broke the wire feeding the motor. To correct this I had to splice on an extension to the wire. If you do the same make sure and find a thick wire to handle the current.

The actual root cause turned out to be that the motor was able to twist itself inside the housing because the white piece of plastic that the motor spins in was not held tightly in the housing. If you perform this repair, try and find some way, such as a little glue or silicone to hold that piece tight when you reassemble. Also make sure that the motors contacts are positioned so that the wires are held away from the motor, and even use some tape if needed to hold them up.